Skip to content
Four long-serving Bush Search and Rescue members had their contributions to search and rescue, bushwalking and the wider Victorian community acknowledged when they received Distinguished Service Awards from Bushwalking Victoria in July 2013.
Monica Chapman 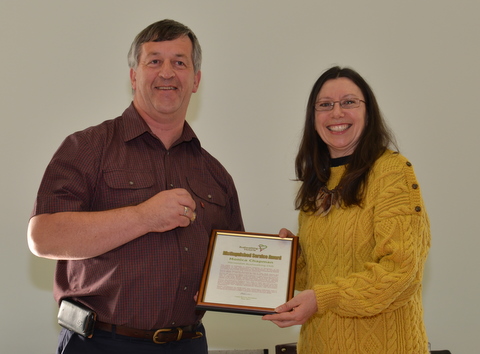 Chris Towers and Monica Chapman
Monica Chapman joined Maroondah Bushwalkers in 1981 and joined the Bush Search and Rescue in 1992 after completing the BMLC in 1991.  Monica has also been the club delegate for Maroondah during since 1996.   Monica was president of Bushwalking Victoria from 1992 to 1995 and coordinated the Bushwalking Victoria 75th Anniversary celebration.  Monica was appointed a BSAR Field Organiser in 1995 and is still active in that role.
Monica served as the BSAR Convener from 1998 to 2009. During this period she played key roles in improving BSAR’s search capabilities, producing an updated version of the BSAR manual, changing the organisation’s name, logo and website and securing funding for many items of new search equipment.   Monica coordinated the BSAR 50th year anniversary celebration held in 2000.
Monica has provided peer support services within BSAR since 2001 and is also currently managing the induction of BWV Individual members who join BSAR.
Monica Chapman’s service and contributions to bushwalking and the Victorian community as a member of BSAR cover 21 years to the present day. 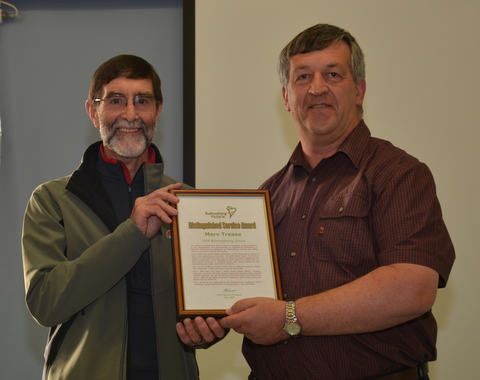 Merv Trease and Chris Towers
Merv Trease joined the Youth Hostels Association (YHA) Bushwalking Group in 1972 while studying at university.  He joined the Bush Search and Rescue in 1974 and became the YHA club delegate on the BSAR Committee.
Merv served as BSAR Convener from 1981 to 1984 during which he worked to improve committee processes, annual programs and forward planning.   He was elected as a BSAR Field Organiser in 1984 and served in that position for four years until 1988.   Merv served as the Bushwalking and Mountaincraft Leadership (BMLC) Search and Rescue Group Coordinator for several years in the mid 1990’s.
Merv then became a BSAR Police Liaison Officer and has served in that position from 1995 to the current day, a period of 18 years. Merv has initiated numerous searches as a PLO, including several large-scale searches that have required multiple call-outs.
Merv has trained, assisted and mentored several new BSAR Police Liaison Officers and been regularly involved with numerous BSAR training weekends in several roles, including training organiser and instructor.
Merv has been a key contributor to several BSAR Committee working groups including the  development of the BSAR Field Organiser and Police Liaison Officer Manual.  Merv was also a lead author for the Victorian Rogaining Association Search and Rescue Procedures.
Merv Trease’s total service to the bushwalking community as a member of BSAR is 39 years.  He has made a very significant and ongoing contribution to the development and operation of Bush Search and Rescue and been directly involved in providing search and rescue services to the bushwalking and wider community in Victoria. 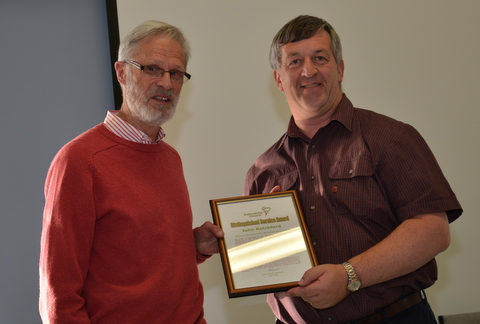 John Retchford and Chris Towers
John Retchford was a member of Melbourne University Mountaineering Club.  John’s first search was in early 1961 and he was an active searcher and Group Leader until his appointment in March 1973 as Field Organiser.  He was a Field Organiser for 28-years, then continued his involvement with BSAR as a Police Liaison Officer until 2006.  John returned to BSAR in November 2011 as one of its Peer Supporters.
John was Convener from 1976 to 1979 and remained a leading figure and mentor within the organisation until his retirement from the PLO position.  As Convenor, John made presentations to a large number of groups on search and rescue and outdoor safety.  He also assisted in organising numerous training weekends.  He was chair of the sub-committee that prepared the first edition of the Search and Rescue Manual in 1993 and was one of the reviewers of the second edition in 2003.
The 1998 coronial inquest into the Wilsons Promontory search for Paddy Hildebrand saw John giving evidence on BSAR’s role earning considerable praise from the Police and Coroner alike.
In 1978 he became BWV’s representative on the Bushwalking and Mountaincraft Training Advisory Board and holds the record for length of service as a Board member contributing to many different projects.  He was Director of Final Assessment Week from 1978 to 1980 and taught steep snow and ice techniques to the Ski Tour Leaders Course members.  John assisted in updating the second edition of the BMTAB Handbook and was a contributor to the completely revised third edition.  John is currently one of BSAR’s peer supporters.
John was also active within his club and instrumental in selecting the site of the MUMC Hut in the mid-1960s.  John Retchford’s service and contributions to bushwalking and the Victorian community have been substantial for a period of over 46 years to date. 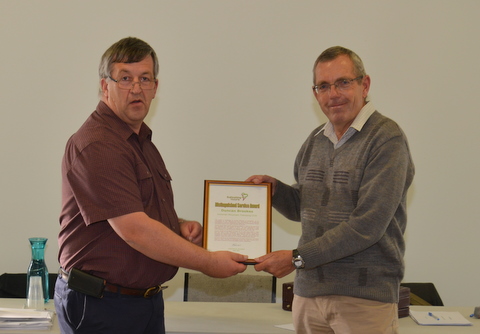 Chris Towers and Duncan Brookes
Duncan Brookes, a member of the a Victorian Mountain Tramping Club (VMTC), joined Bush Search and Rescue in 1972 at the age of 18 and attended his first search in 1974.
Duncan served as the VMTC Delegate on the Bush Search and Rescue Committee for several years and was appointed a Field Organiser in 1978, a position he holds to this day.  Duncan has lead BSAR on over 20 searches during his 35 years service as a Field Organiser.   Duncan served as the BSAR Convener for 10 years from 1984 to 1994.
Duncan has been a key and regular contributor to improving BSAR’s procedures, including development of the BSAR Manual and the BSAR Field Organiser and Police Liaison Officer Manual.  Duncan has also been a key training organiser, leader and instructor on numerous BSAR training events over four decades.
Duncan’s total service to the bushwalking and Victorian community as a member and leader of BSAR spans 41 years, during which time he has been a driving force and major influence on improving BSAR’s search capabilities.

Bushwalking Victoria’s Awards Scheme recognises outstanding contributions made by individuals or clubs to the
development of recreational walking in Victoria, and/or furthering the objectives of Bushwalking Victoria and/or adding value to the wider Victorian community. These awards acknowledge the dedication of those whose special efforts have made a difference. The scheme was instituted in 2009 as part of Bushwalking Victoria’s 75th Anniversary celebrations with nominations being sought every three or four years.