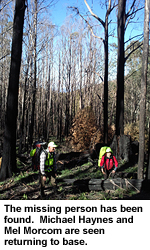 12 July 2010 11:50am A woman who was reported missing overnight near Lake Mountain has been found safe and well.

She had spent the night lost after visiting Alps Lookout alone at around 3pm the previous day. On her return to the car park the track became difficult to follow and she eventually veered off the proper track.

She remained active during the night and searchers from the Victoria Police were able to detect possible tracks.

BSAR searchers arrived at Lake Mountain at approximately 8.30am and were deployed shortly afterwards.  BSAR search parties were initially tasked with searching the gully system at the head of the Koala Creek catchment, an area around and mostly below the point last seen.

Meanwhile, after continuing to follow tracks in the morning, police searchers established voice contact shortly after 11am.

12 July 2010 6:00am Twenty BSAR searchers left Melbourne at 5:00am to participate in the search for a 48 year old woman missing overnight at Lake Mountain.  The missing person is on foot.

There is only patchy snow on the mountain.  Searchers are dressed and equipped for walking only.  Additional information will be posted to this article when available.